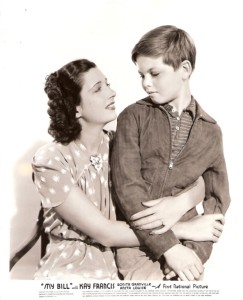 “If Warner Brothers forced Kay Francis to play a middle-aged mother of four adolescents in My Bill in an effort to discipline her, their plan has boomeranged laughably. The picture, previewed a few nights ago, is a triumph rather than a humiliation for Kay,” Jimmie Fidler, 1938 article for the San Francisco Chronicle

Enthusiastic reviews like Fidler’s kept Kay Francis fans hoping that Warner Brothers would come around and give her career the great big sigh of relief it needed. But his words far stretched the importance of My Bill for Kay Francis. My Bill was hardly a triumph in Kay’s career, but it did have the distinction of being the first B film of her career as a major Hollywood star. Also, it was the success of the film which gave the production executives at Warner Brothers a much deserved slap in the face.

After reigning as the most popular female star at Warner Brothers for much of the 1930’s, Kay Francis’ career hit its peak during the 1936 and 1937 movie seasons. It was at this time she was featured in literally hundreds of publications, voted the sixth most popular star in the entire movie industry by Variety, and receiving the highest weekly salary of any other star/producer at Warner Bros, $5,250. However, it was also at this time when her relationship with the Warner Brothers executives began to dissolve.

Though her films were making good money at the box office, they felt that she was being paid too much. When she began to have differences with the studio over the type of films she should be making, she filed a lawsuit against the studio to end her contract and allow herself to freelance as an artist.

At first, Kay’s demands to be released from her contract were ignored by the executives. She was far too popular to let her get away, but, in an interesting twist of sides, somehow the Kay Francis v. Warner Brothers battle ended with her staying on to collect her impressive salary. They became eager to do anything which would humiliate her enough to the point where she’d quit. They lowered her billing, filled her scripts with r’s and l’s (which she couldn’t pronounce), and forced her into what would become some of the worst films of her career.

My Bill was supposed to be one of those films.

Tom Barry’s 1928 play “Courage” opened in New York that same year starring Janet Breecher as a single mother of seven children, at least one of whom may be illegitimate. It was adapted for the screen by Warner Brothers in 1930 with Belle Bennett as the mother in a picture directed by Archie Mayo, who later directed Kay in Give Me Your Heart (1936), among other films.

Bryan Foy, a B movie producer for the Warner Brothers-First National Studios, was unimpressed with the original script, and fired that writer and replaced him with Vincent Sherman. On a Thursday afternoon Sherman was given the assignment, and told to hand in a finished script for My Bill to Foy’s office by Monday morning. Within that three-day period, Sherman managed to rush through the writing to complete his assignment on time, a flaw in the finished picture which stuck out like a sore thumb.

Production began March 31, 1938 and concluded on April 25. John Farrow was set to direct Kay as a forty-six-year-old mother with four children, one of whom was played by actress Anita Louise, who was only ten years younger than Kay, then only thirty-three when the film was produced.

The New York Times dismissed My Bill as “all too pat, too incredible, too unimportant.” But the public did respond to the film, giving it a much more generous reception than it had met with the critics. In fact, My Bill proved to be popular enough to be revived on the radio again on March 3, 1941 when Kay and Warren William starred in a version of the play on Lux Radio Theatre.

In Colbrook, Massachusetts, widow Mary Colbrook is raising her four children, Gwen, Muriel, Reginald, and Bill. She is the widow of Reginald Colbrook, who’s father William founded the city years ago. Because of this they are a well known family in town, but rumors and gossip linger around their household about Mary’s faithfulness to her late husband. In the eyes of many, Bill is an illegitimate child Mary had with lover John C. Rudlin, a banker in town. Caroline Colbrook, Reginald’s sister, is especially suspicious of Mary, and has decided that now is the time to do something about the future for Gwen, Muriel, and Reginald.

Unfortunately, Mary wasn’t wise with the money she was left by her late husband. She has squandered most of the family fortune by trying to live a lifestyle she couldn’t afford, and now the creditors and bankers are after their possessions. While Gwen is practicing her piano, Reginald walks in, distraught because the family credit isn’t even reliable enough for him to buy a simple tie. When men come to take the piano away from the house, Gwen, Reginald, and Muriel become suspicious of their own Mother. They insult the way she has managed the family finances, which may seem reasonable at first, but not when one comes to learn of their high demands.

Muriel insists that if she doesn’t get a new dress, she will refuse to go to her fiancé’s party. Reginald demands to know who is going to pay for his college. And Gwen babbles on with meaningless complaints about everything Mary does wrong in her eyes. The only child of Mary’s who appreciates her is Bill, who calls her “Sweetheart.”

Bill hates his siblings. He sees them for the spoiled, arrogant, and rude bunch they really are. His view on life is, if you want a new dress, save up the money and buy it yourself. If you want to go to college, get a job and take night classes. And the less time you leave for complaining, the more time you have for doing. Most importantly, if you see that your mother is in a financial disaster, try to help her out of it, instead of criticizing and belittling her every move.

They don’t see it his way, and pack up their things and move in with their Aunt Caroline, leaving Mary and Bill to fend for themselves.

Meanwhile, Bill has come across an unlikely friend. Playing football, he kicks one right through the window of old Mrs. Crosby, a woman rumored to be a bitter recluse. Bill befriends her after a rocky start, and becomes the only friend she can count on.

Mary is helped out considerably by Rudlin, which raises the eyebrows of Aunt Caroline, confirming the rumors in her mind of Mary’s relationship with him, and the fact that he may indeed be Bill’s real father. When the money runs out entirely, Bill starts a newspaper stand because Mary has trouble finding a job. With nothing left to keep them in Colbrook, Mary decides that it is time for her and Bill to pack up and move to New York City, where the work will be easier to find.

Bill runs over to Mrs. Crosby’s house, finding her in a serious condition. She is dying, and insists that Mary and Bill move in with her. They do so, and stick with her until the very end, and she rewards them by leaving Bill as the sole heir of her rich estate.

Gwen, Muriel, and Reginald have grown tired of Aunt Caroline’s stuck up attitude, and her insults about their own mother. They decide to return to Bill and Mary after Rudlin makes the facts clear to Reginald and Muriel that they need to grow up.

The film ends with Aunt Caroline being thrown out, the family being reunited, and Mary giving the explanation of what happened with Rudlin in front of Caroline and the children. As it turns out, they did love each other, but before Mary married Reginald, who was cruel and demeaning towards her. He accused her of having an affair with Rudlin, producing Bill as a result, but that wasn’t the case. Bill is just as much of a Colbrook as Gwen, Muriel, Reginald, and even Aunt Caroline are.

The children agree that it is time for Mary and Rudlin to finally be together.

This is such an over the top, corny film, but I love it. It’s not brilliant, intelligent, or obviously realistic, but it’s one of those movies that’s so cheesy it’s good.

Kay is really cheerful in this one. So much so it’s refreshing, and, as Lynn Kear pointed out in her books on Kay, she couldn’t have been happy during the filming of My Bill. So for those who want to belittle Kay’s talent as an actress, turn to this one to see how well she could disguise herself in a role.

Stealing most of the picture, which is odd since he’s last billed under the leading cast, is Dickie Moore.

When one wants to think of the typical, low-budgeted, Hollywood programmer for small town America of the 1930s, no other picture than My Bill should come to mind. It’s quick, cheesy, and to the point. It wastes no time as mindless entertainment and ends almost as quickly as it begins.

One can see why some people really love this movie, and Kay Francis in it. 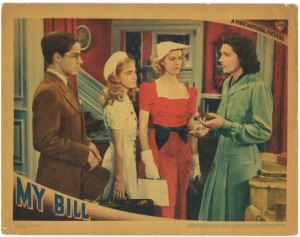 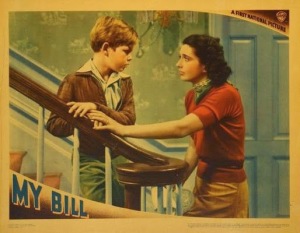 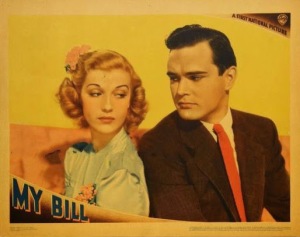 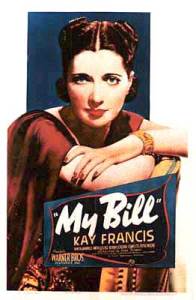 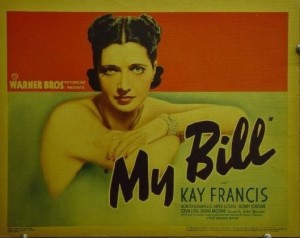