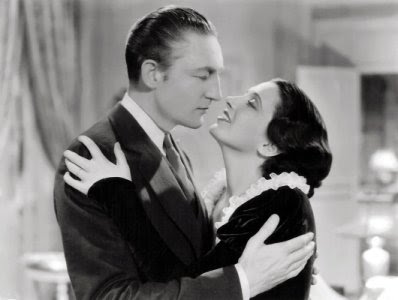 Dr. Monica was Kay Francis’ twelfth movie with Warner Bros., and the last of her Pre-Code career. It was her second picture which featured Kay as a doctor, and the success of Mary Stevens, M.D. (1933) had WB ready to get something out there that Kay Francis fans would love to see. To build the film from the groundwork Mary Stevens had completed for her, the studio decided that Kay’s Pre-Code career would go out with a bang that audiences would wait in long lines to see.Originally, the film was to be a reunion of Barbara Stanwyck and Joel McCrea (CR), who had worked so well together in Gambling Lady (1934, Warner Bros.). Two versions of the story reveal Kay’s casting in the title role. The first tells historians that Stanwyck just turned the property down, feeling that it was just a glossy weepy with little going for it. The other insists that Kay, riding high from her successes in The House on 56th Street (1933) and Mandalay (1934), was rewarded with this commercially safe vehicle—a picture that the studio knew people would run to see.

Whatever the case, Dr. Monica met with a major backlash from the Catholic Legion of Decency and the Production Code Administration (SISF). Not only did Monica deal with her husband having an affair, but he also fathers a child out of wedlock. Not even regarding the pregnancy of Mary, Monica’s desire to have her own baby with John—which is physically impossible for her—was already too much for the Studio Relations Committee. With the added pregnancy of John’s mistress, one of Monica’s closest friends, and her considering of an abortion made SRC head Joseph Breen furious:

“In the bedroom scene between Monica and Mary, you will delete the following lines: ‘Just what do you mean?’ [and] ‘You know!'” (SISF)

As of March, 1934, when Dr. Monica was in production, there was little the SRC could do to control the studio’s actions. Warner Bros. made the suggested cuts, but the film still infuriated Catholic censors, who condemned the film before it even was shown on the movie screens. The rave reviews and great public response only added fuel to the fire.

With the enforcement of movie censorship as of July, 1934, Dr. Monica never completed its theatrical run (read article below). It was pulled from theaters and locked away within the studio vaults until showings on TCM revived its legacy and that of its stars, Kay Francis and Warren William.

A maid servicing at a cocktail party answers a telephone call. The caller is searching for Dr. Braden, who enters just as the maid is on the phone. She arranges to see the caller first thing the following morning. “I’m seeing that precious husband of mine for the first time in two days,” she says to a friend who greets her. Monica walks over to her husband, who introduces her to Mrs. Hazlitt, a critic on the Chicago Globe. Mrs. Hazlitt is very impressed with what she believes is Monica’s writing, only it is John’s, who is one of those “wonderful” husbands of the 1930s who allows his wife to be the breadwinner and center-stage.

The one thing that Monica wants more than anything in the world is to have John’s baby. Her chances aren’t too good, and while John’s abroad she plans to visit another doctor to see what the exact problem is. While sitting around a piano with friends, Mary Hathaway begins to play but collapses (1934’s way of telling the audience she’s pregnant illegitimately). She clears up and rushes to her home and is informed by her maid that John Braden has called twice and is on his way over. Looking solemnly into a mirror while fidgeting with her wardrobe, she announces that she plans to return home.

John arrives and makes drinks for both of the (even though she’s pregnant, she drinks it anyway). The two, who have been having a passionate affair, agree to end their relationship when he sails to Europe. John has no idea she’s pregnant, and with his child, too.

Either way, he leaves America the following day.

Monica, Anna, and Mary are at Monica’s home where a solemn Mary drinks as Monica goes on about her desire to have a child. She considers adoption as her only resort; she’s physically unable to have a baby.

On a horseback ride through the country with friends, Monica worries about Mary’s reckless drinking and horseback riding, which results in her hitting a wall and flying off of a horse. Resting in bed, Monica and Mary come to a mutual agreement that it’s obvious Mary’s pregnant, and when she implies that she would like to have an abortion Monica absolutely refuses. “How I envy you,” she admits.

Returning from Europe at Christmas, John presents Monica with a beautiful watch which she knows he “possibly couldn’t afford!”

Monica arrives at Mary’s place to deliver the baby, but is silenced when she hears her calling for John because “he’s hot to be here!” Delivering the baby of a close friend who has committed the ultimate betrayal causes Monica to tell the nurse to “find someone else.” Anna smacks her across the face, “You’re a doctor with an oath to deliver her child.”

She delivers the child emotionless, refusing to even look at it when the labor is complete. “Don’t ever mention that baby to me again,” Monica tells Anna. “And when I come to check on the patient please keep it out of sight.” But her doctor’s instincts tell her otherwise. She realizes the baby is weak because Mary refuses to see it, so Monica brings it to her anyway for care and attention (in reality, the baby was probably in need of breast milk, which it obviously wasn’t getting placed in another room).

Now focusing on saving her marriage, Monica relaxes in a rowboat with John and watches the sun set in the country side. There she announces that she’s leaving for Vienna on business for six weeks. The day before she sails, Anna informs Mary that Monica knows everything; that she delivered the child knowing everything. In return, Mary decides to leave the baby girl with Monica while she flies back to Ohio. Or at least that’s what she wanted everyone to think. The maid hands Monica a hand-written note from Mary regarding the child:

“Forgive me, Monica. I’ll never bother you again. The baby is yours and John’s. Can’t you forgive me and be happy, Mary.”

Mary flies her plane—not to Ohio—but over the ocean to die, leaving Monica and John to raise the child as their own, without John ever knowing that it’s really his own with Mary.

“Hold her John, she’s yours,” Monica tells him as she passes the baby to him.

This film is tiny, running only fifty-one minutes, which is unusual, considering it’s one of Kay’s most famous movies. It was released to enormous success, grossing well over four-hundred-thousand within its tiny theatrical release. Dr. Monica was released in June, 1934, and pulled from the screen in July by the Production Code Administration which condemned the film.

Kay and Warren William were teamed for the first of two occasions on this one (their other film was Living on Velvet, 1935). They don’t have great chemistry, and aren’t too believable as a truly happy couple, which actually serves a purpose because it makes the idea of William cheating on her more believable. The performances of both actors are fair, but make no mistake, this is a Kay Francis movie all the way.

Jean Muir gives an excellent performance as Mary. She’s a little theatrical in some scenes, but she gets the point across. Maybe Ann Dvorak would have been slightly better, but Muir still deserves recognition.

Kay’s gowns are remarkable. One wouldn’t think of female doctors of being so glamorous, but this is Kay Francis we’re talking about. She’s not only a doctor but stylish, also. Sometimes that’s all that matters in a Kay Francis melodrama.

Obviously audiences in June 1934 thought so.

Written by Mordaunt Hall.
Published June 21, 1934 in the New York Times.
In “Dr. Monica,” a picturization of a Polish play which reached the Strand screen last night, the handsome Kay Francis is cast as a renowned obstetrician. The film is not especially suspenseful, but judging by newspaper comments on the original, It is superior to the parent work. It moves apace and the acting is excellent.

Miss Francis acts Dr. Monica Braden, who is devoted to her husband, John, little knowing that he has had an affair with her attractive friend, Mary Hathaway. John comes to life in the person of Warren William, and Mary is played by Jean Muir. Verree Teasdale helps the story along as a loyal friend of both Mary and Dr. Monica.

The women in the case are Trojans and the man is—well, one might almost say, vile. His infatuation for Mary is apparently not considered with great seriousness by him. He goes to Europe and hopes to forget. Thus there is the scene with Dr. Monica, Mary and Ann Littlefield (Miss Teasdale) on the pier waving good-bye to Braden. Dr. Monica is sad because she is going to be separated from her husband for several weeks, and Mary is sad—because she is about to become a mother.

Young as she is, Mary reveals a sudden inclination thereafter for strong drink. She is averse to letting Monica know that Braden is responsible for her condition, but she does tell Ann. When the time comes for her to enter a maternity hospital, John, now back in America, nonchalant and selfish in his love for his wife, does not give much thought to Mary. But through a hospital scene Dr. Monica learns the girl’s secret. At first the wife declines to officiate as the physician in the case, but she is more or less forced to do so by Ann.

Subsequently it develops that Monica has decided to be sacrificial, so that her husband can be happy with Mary, and later Mary proves herself to be the most gallant lady. It is scarcely a story in which the male figures in anything but a bad light, which is probably as it should be. Braden, however, is too thoughtless to deserve the happy ending—for himself—in the narrative.

Miss Muir gives a touching portrayal. Miss Francis is believable in her rôle and Miss Teasdale adds to the general interest of the film. Warren William does quite well in his thankless part.

From the August 1934 issue of Screenland:

Below is a brief article published July 31, 1934 in the New York Times. It is one of many articles published throughout the country, which revealed the news that Dr. Monica had been pulled from the screen no more than two months after its theatrical release.

“I am as much opposed as any one to vulgar and gangster pictures, but ‘Dr. Monica’ does not come within either of these categories,” she said. “It is a clean picture, well acted. ‘The Thin Man’, with William Powell and Myrna Loy, is light, amusing, and certainly inoffensive. Yet it was banned. Such tactics will lead to the Pollyanna type, which is neither good art nor entertaining.”

The Mayor admitted he had not seen ‘Dr. Monica’, but had received many complaints.

Advertisements from the Motion Picture Herald, 1934.