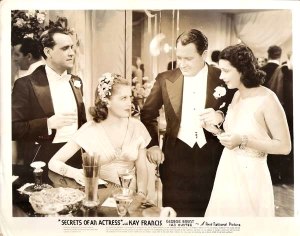 Kay Francis’ battle with Warner Brothers was in full-bloom during the production on this one, and their attempts to sabotage her career are evident in the lack of drama, story, and production value. Filming began February 17, 1938 and ended around mid-March.

For unknown reasons, Secrets of an Actress was initially shelved after it completed production at the First National studios. Then under the title of Lovely Lady—taken from Milton Krims’ Lovely Lady, the screenplay which inspired the film—it sat on the shelves until the release of Kay’s next B movie for the studio, My Bill (1938). Suddenly, someone decided to dust of the prints, change the title, and Secrets of an Actress was released for theatrical exhibition on October 8, 1938.

Reviews for Secrets of an Actress were moderate; decent but not too enthusiastic. The New York Times noted that the only shocking thing about the picture was that the predictable plot was still being used by the major studios. The Motion Picture Herald, however, wrote that “If Vitagraph wants to kill off Kay Francis, they are doing a swell job of it.”

Today, there is only one major detail to the film which makes it notable in the Kay Francis history books for a very special reason. This was Kay Francis’ final film with frequent costar George Brent. A sad finale to one of the great teams of the 1930s, years later he named Kay among the most glamorous women to ever appear on the screen (as did many of her costars). Ian Hunter had only one more film with Kay under his belt after this one, Comet Over Broadway (1938).

As with nearly all of the characters she portrayed on screen, however, Kay Francis did perceiver. Her long-awaited comeback would be seen the following year in one of the classiest soap-operas ever made, In Name Only (1939). 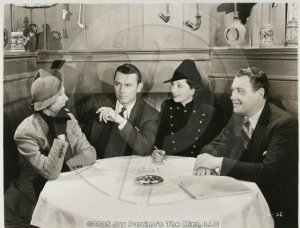 Fay Carter has reached a fork in the road of her acting career. She’s tired of theatrical touring. “There’s no road anymore,” she insists to her agent. “What used to be the road is now a double feature movie, a newsreel, a travelogue—and try to get in on bank night! No.” She gives him an ultimatum “Either I’m going to see my name in lights in New York or quit the profession entirely.”

It’s Broadway or nothing.

Fay gets a decent audition for a good part in a good play, but the producers back out because the financial backers want someone whose a sure box office star. They’re not risking money on an unknown actress to star in a big production and risk the chance of having it flop. The producers, who really see Fay as the lead part in the play, break the news to her by saying that the higher-ups think she’s “too sophisticated to play a milk maid.”

Out with roommate Marian, Fay finds herself again babysitting the other, who has gone on another drinking binge. Marian swings her right arm and hits Peter Snowden, an architect. He helps Fay take her back to their apartment, and between Marian drunkenly falling over both of them, they become acquainted in the back of the car. She tells him that she is an actress, the daughter of Henry Carter, famous for playing Hamlet on the stage for years. As it turns out, of course, Peter and Fay both appeared in one of Henry’s productions together, and Fay goes on about her new ideas for a play she’s written.

Luckily for her, Peter is interested in producing it. He asks his business partner, Dick Orr, to help him with the sets. At lunch, Dick and Fay go back and forth over what chances the production actually has to succeed. After they get nowhere, Fay, Marian, and Peter get Dick to change his mind and chance it.

“Springboard,” starring Fay Carter, opens in New York with Fay as the headlining attraction. It’s a success. “I wanted to show you your city,” Dick tells Fay during an intimate moment the two share on a balcony. “You took possession of it tonight when the curtain rang down on the last act.” They kiss.

Later, Peter unknowingly tells Fay that Dick is married to a world-class bitch named Carla, leaving Fay slightly bitter towards Dick. He sees Carla for a divorce, but she refuses to grant him one. Thinking that there’s no future with Dick, Fay agrees to marry Peter, although she is not in love with him. During a car ride home from a party, he comes to realize that the entire thing is a mistake. So, being played by Ian Hunter, Peter has to come up with a way to get Carla out of the picture for Fay and Dick.

Having drinks with Carla, Peter lies to her, saying he is going to fire Dick, which means Dick will be without a cent. Because of this, Carla agrees to divorce him. Fay tracks Dick down. He is onboard a parting ship for Norway, and she spells out “Carla” on one suitcase so he can read it from the deck, writing “Divorce” on another so he can put the two together.

It clicks in, and he jumps down and embraces Fay.

If My Bill didn’t make it clear to audiences that Kay Francis was old news on the Warner Brothers lot, Secrets of an Actress confirmed it. The plot is so empty, so unimportant, a canvas so blank it makes one wonder why they even stretched it out into the tiny duration it already has. They could have pieced this claptrap together in fifteen minutes and made it maybe slightly more entertaining.

For Kay Francis fans, you need only watch this one for her beautiful hairstyles and gowns. This appears to be the only extravagant part of the movie. And though she’s a little thicker in this one than her previous films, she’s still stunningly beautiful. Kay always looked good with longer hair, and in this one she appears in full advantage of her best features. Aside from her hairstyles, her gowns and hats are elaborately designed, though at times they are a little too over the top for an unknown actress running low on cash to be wearing.

This is one of the few movies in which you’ll see Kay Francis deny a cigarette. I could be wrong, but I don’t remember her having one in the entire film.

Notice how many times the script calls for her to say Dick’s name. In some scenes, she says it more suggestively than others. “Who is the woman with Dick?” Aside from all the R’s she’s given to mispronounce, it becomes clear the studio had the writers trying to make her into a perverted joke for audiences.

This is a good one for fans of Ian Hunter. It’s one of his best romantic leads, and in terms of his pictures with Kay Francis, he is given more time to be with her onscreen. Aside from Stella Parish, White Angel, and Stolen Holiday, their other films having them loving for only so many minutes of the entire print. Watch him when he realizes that Fay doesn’t love him. He’s at his best in these moments, and the final shot of him in the car at the end of the picture at least indicates that he’ll be moving on, perhaps to a woman who will love him for him, and not just as a business partner.

It would have been nice to see Rosalind Russell play the role of Marian. Isabel Jeans gets annoying, and Gloria Dickson is too predictable as Mrs. Dick Orr. Though she’s a convincing bitch, her hair is dyed platinum blonde, she wears a lot of makeup, and is gowned in strange clothing. It’s enough to make one almost tired of these types of characters standing in the way of Kay’s happiness in her movies.

As usual. George Brent play George Brent. And for those of you who recognize the actress who plays Peter’s secretary, she’s Dennie Moore, the manicurist in The Women (1939) who tells Norma Shearer the bit of gossip of “this Crystal Allan girl who’s hooked Mr. Haines.” 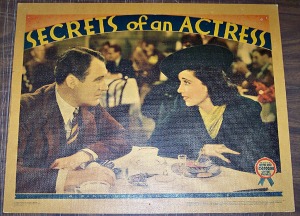 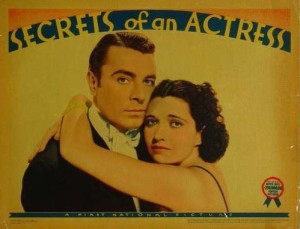 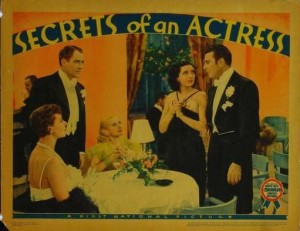 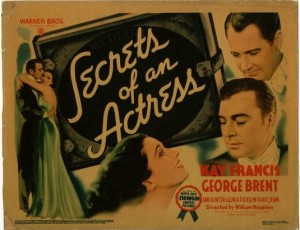